What they don't tell you on the TV is that you film for six days and then have Sundays off. We were fortunate enough to arrive on the Coach on Saturday lunchtime which meant that on Sunday morning we woke to this view from the balcony of our 5* hotel in Alghero, Sardinia. We had left a wet, rainy October day in Scotland. Temperatures here were in their early 30's. 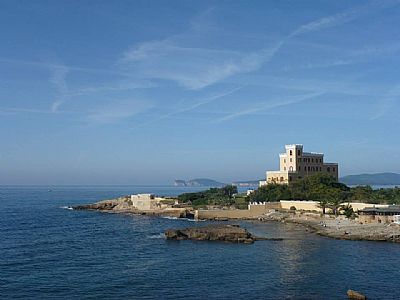 We joined the rest of our fellow travellers for breakfast and discussed what we were going to do with our day. Most of them wanted to relax by the pool. We decided to do some sight-seeing, have lunch, and then come back and join them. So off into Alghero we wandered, having a great time stopping to admire the view, to take photographs, to browse (and spend money in) fab shops and occasionally pinch ourselves to remind us that we really were here. 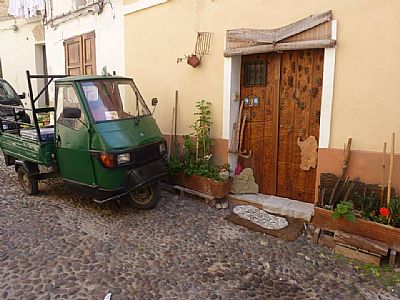 Alghero is fabulous. It has the narrow streets of any Italian town or city but also has influences from North Africa in its tiles and architecture. We wandered around,being serenaded by the haunting sound of a solo saxaphone which echoed through the narrow streets. I came across an 'Ape' and decided taking a snap of it for Rob was a damn sight easier than taking one home as a souvenir.

The rest of the day was a lazy one. Lunch in a pavement cafe (where we got joined by some of the others), lazing by the pool, and then most of us went out en masse for dinner. 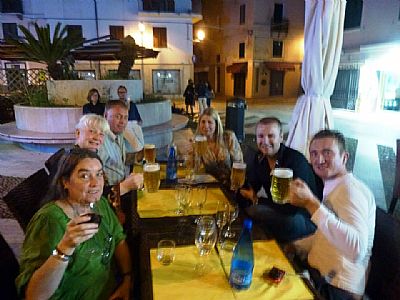 It would have been nice to be left there, all expenses paid, for a few days to explore but unfortunately the film crew weren't having that. The following day we were up bright and early (too early, LOL) and off for ther day's activities. I was horrified to discover that we were going on high wires, an activity my partner Rob has been trying to persuade me to do for years. I had always backed out as I didn't want to make a fool of myself in front of his daughter and now I was going to have to do it in front of a potential 2 million viewers. I wisely kept my fears to myself which is just as well as poor Mandy got stalked by a TV camera all the way round the course. The poor girl was terrified and to her eternal credit she got round the course on a combination of willpower, courage and the power of prayer. 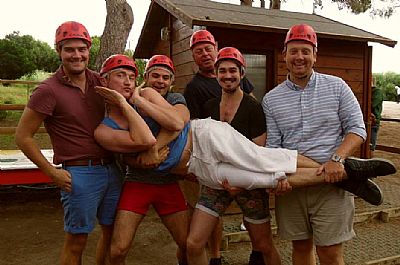 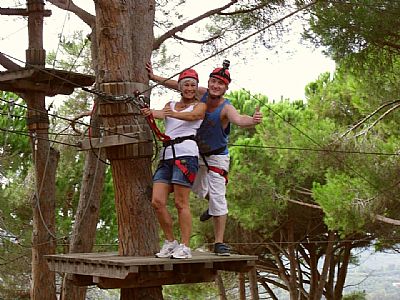 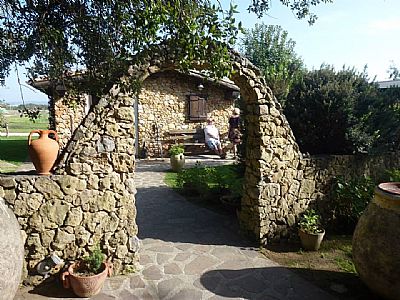 The afternoon's activity was far more to my liking and for the first time in my life I was glad of having a cold sore as it meant that Denise and I had a wine glass each rather than having to share. This gave us ample opportunity to sample the local wines which, in my case, got well filmed as every time I was shown onscreen that afternoon I appeared to be lifting a glass. And then came the cheeses. The first two were lovely if rather strong but Denise and I had spotted something more dodgy on our way to the table and were wary about the rest of the activity. Being vegetarians gave us an excellent excuse to sit back and watch the others sample the local produce. To my mind giving a lamb its first drink of milk and then slaughtering it so that the rennet in its stomach turns it into cheese is horrible and even more distasteful than the idea of putting maggots into cheese and then consuming the resulting product. Others, notably Margy, felt differently and expressed it in a rather spectacular manner which led to her and Mandy getting their red card later on in the day.

You can watch our second day on the Coach here

... or go back and read about our first day on the Coach here