When it comes to planning a wedding the ceremony itself is often the part that receives the least thought. Many couples believe that the only choices available are a traditional Church wedding or a Civil Ceremony (which can have no spiritual content) conducted at a Registry Office.

There is an alternative!

I am one of a handful of Celebrants in Scotland holding a licence from the National Records Office of Scotland to conduct a legally-binding Pagan wedding ceremony. These can be written to order to obtain an individual ceremony that reflects your requirements and spiritual beliefs and you don't have to follow a Pagan path to use my services.

As of midnight on the 31st December 2014 I also hold a licence to conduct a legally-binding wedding service for same sex couples.

Handfasting ceremonies are most commonly associated with Pagans but they also appeal to those interested in alternative lifestyles and spiritualities.  I can conduct a ceremony anywhere in Scotland and have performed ceremonies in castles, woodlands, stone circles, by loch sides, up mountains as well as in a couple’s own home or garden. 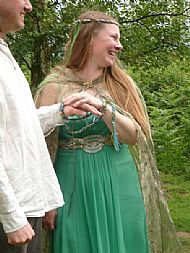 A wedding ceremony legally has to include a declaration by the bride and groom in the presence of the Celebrant and of two witnesses that they take each other as husband and wife and the Celebrant then has to declare them so. Apart from that the choice of what to include is up to them. A ceremony could include blessing the rings, jumping the broom, the ritualised tying of hand (hand-fasting) to symbolise the union and blessings and readings from friends and family. All ceremonies are written with extensive consultation with and contributions from bride and groom, can be as formal or informal as you choose and offer a lot of scope for family and friends to become actively involved. No two ceremonies are the same!

I also conduct ceremonies for baby-namings, funerals, memorials and tributes as well as re-awowal ceremonies and non-legally binding handfastings and blessings.

During the course of my work I have conducted ceremonies all over Scotland for couples coming here from all parts of the U.K. and Europe including France, Switzerland, and the Netherlands. I have also acted as Celebrant for wedding blessing ceremonies as far away as Istanbul. 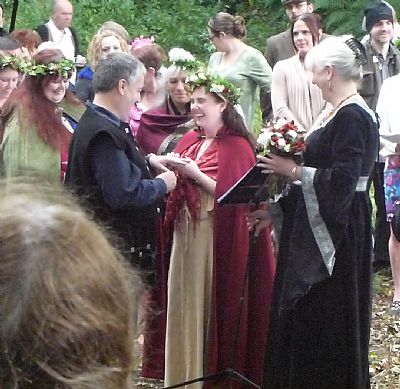 More details about wedding ceremonies and about the services I offer can be found on the following pages:

Ideas that can be incorporated into your ceremony

Guidelines for planning your wedding

Legal requirements for organising a wedding in Scotland

Ceremonies for other rites of passage (e.g. naming ceremonies, memorials)

Costs for writing your ceremony